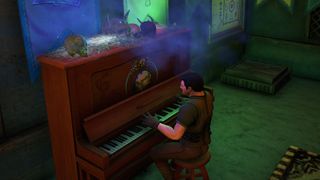 It's an odd feeling to walk into a house in a game and not know who put it there. There I am above vamping on a painstakingly dressed occult piano that leaks magic purple gas. On a table nearby there is a radio. When I click on it I have a choice of two player-created radio stations that I can stream straight into my game. There are also books I can pick up and read. I have no idea whether the devs or a player wrote it.

Game director Richard Garriott probably doesn't know either. When you give players the tools to build their own cities, write their own novels and even build entire quest lines, things can spiral quickly. PaxLair is one such example. It's one of the largest player-built cities in the game at the moment. Garriott enthusiastically shows me around the place.

"This happens to be one of the best roleplaying groups in the game," he says. "PaxLair was the first player run town ever in Ultima Online and that same group of people has migrated to Shroud of the Avatar, rebuilt PaxLair in what they and we consider to be the spiritual successor to where they lived previously."

A billboard at the town entrance lists contact details and a Discord address for the community. There is a public chest just nearby that anyone can fill. Garriott drops in a bottle of elven wine as a gift for the next adventurer to wander through.

Shroud of the Avatar doesn't look like much at first. The graphics are about a decade out of step with current RPGs. The taskbar combat is stilted and dull. However, I have logged back in a few times in the past week simply to explore SotA's towns. I am inspired by the dedication of the community that builds them, and also strangely a little unsettled by the experience of exploring them. I can't help but I keep second-guessing the spaces. A developer wouldn't put two pianos next to a greenhouse outside would they? Surely a player did that, but why?

Players will soon get tools that will let them put together complex quest lines, but they have already done some crazy stuff. There is a book registry system to sort everything published according to in-game date. We find a book published in the year 497, which is 97 in-game years after the start of Early Access. It's written in Runic. You don't unlock a skill to magically translate those symbols, you just have to learn the language. "I don't even know if this book is one the players put in or one of my employees put in," says Garriott.

Nearby there is a digital recreation of a Teletype machine. You can boot it up and play Richard Garriott's 1977 D&D game. A player put that in too.

There are rules to limit players. You can't just grab a patch of land and start building things. "You want to give [players] as close to powers as we have as creators, to make interesting events, as long as it can't affect the economy," says Garriott.

"We want people to be able to build a quest that is very sophisticated. You leave clues around, traps around, chests and discoverability around, but all the things that go into those rewards have to be things they've earned themselves, otherwise they can create value out of nothing."

Attaching in-game gold costs to builders encourages guilds to pool resources and set up towns and, according to Garriott, guarantees a degree of quality and dedication from SotA's user-created content.

"A lot of games that have tried to go that way with player created content often become worlds filled with uninteresting junk. Half-finished, half-baked ideas. The only way to prevent that from happening is to make sure that, like in a normal city, the reason most restaurants aren't terrible restaurants is because it costs money to be able to rent that space and you're only going to be able to keep that restaurant there if it's actually interesting. We've done that through the player economy. There are player-owned towns that are owned and governed by people."

There are many dev-made towns in SotA of course, denoted by ribbons on their names. The game has a story you can play solo, pushed forward by major world events. A huge meteor strike announced the full launch last week. It destroyed an entire zone and revealed new underground dungeons. That's neat, but it's always the community side of SotA that proves more interesting. As the meteor loomed ever-larger in the sky during Early Access players embarked on a land rush, not knowing where the fireball would land.

Many games have customisable spaces, even MMOs. Shroud of the Avatar reminds me of stories of the player-created houses in the deceased Star Wars: Galaxies. SotA doesn't have anything as obviously flashy as the Star Wars licence to entice players, but the Ultima following is strong. The cult of Lord British has developed a collective authorial voice, rooted in serious D&D roleplay, but with strange cosmic twists. The shifting constellations that hang above you in Shroud of the Avatar reacts with shrines players build in their towns. When the planets align, sinister cabalists materialise and lay siege to villages.

I don't mean to disregard the influence of Ultima Online director Starr Long on the project, nor the narrative director and Dragonlance author Tracy Hickman, but let's not underestimate the rallying force of Richard 'Lord British' Garriott himself here. Nicknamed after his first D&D character when "some southern Americans mistakenly thought I had a British accent," the Lord British in-game persona has been at the heart of some of Ultima Online's greatest stories. Delighted players greet him in-character as we wander around the territory near PaxLair. As we explore he discusses the changing economics of cloth maps, uses our Skype video call to show me the Apple 2 he used to code Akalabeth, and rustles through some old D&D character sheets. "I am a super pack rat. I have kept the originals I wrote of everything!"

I wonder if Shroud of the Avatar's surface problems will ultimately play in its favour. If you're after a flashy fantasy MMO then Final Fantasy XIV and World of Warcraft are still going strong. But if only the most dedicated and community-driven players end up sticking with SotA, the community ought to retain its integrity and keep the Ultima Online flame alive. I'm looking forward to going back again in a few months. The game only left Early Access last week, and you can already listen to Avatar radio while playing a text adventure from the '70s. Whatever next?

There are no comments to display.